Gina Wills is in her fifth season as the head coach of the Washington and Lee field hockey program. Over her four seasons, the Generals have compiled a 47-29 (.618) record and claimed the second ODAC title in program history in 2017. W&L also advanced to the second round of the NCAA Tournament for the first time in school history in 2017. Over her career, Wills has an overall record of 168-69 (.709) in 11 seasons.

The team has made it to the conference title game in three of the four seasons during Wills' tenure. This includes three straight from 2015-17, which is the first time in W&L history the field hockey team made three straight championship games. Over her four seasons, the Generals are 24-6 (.800) in league play, 32-4 at home (.888) and Wills has been named the Coach of the Year twice. Wills has coached two All-America honorees, nine players have earned 20 All-ODAC laurels, including eight first-team recipients, and four players have garnered all-region accolades a total of six times.

Under coach Wills, the Blue and White had one of the most successful seasons in program history in 2017. The team tied the school record for wins with a 15-5 record. W&L went a perfect 7-0 in ODAC play for the first time and won its first NCAA Tournament game. Wills was named the ODAC Coach of the Year following the season. Forward Haley Tucker ’19 was named the ODAC Player of the Year and garnered All-America honors after the year. During the season, Wills surpassed 150 wins for her career.

In 2016, the Blue and White finished the year 13-7 overall and 6-2 in the ODAC. Following the year, Maggie Waxter ’17 earned the ODAC Player of the Year Award and received All-America accolades.

In her first year, Wills led the Generals to an 11-7 overall record and the top seed in the ODAC Tournament with a 6-1 conference record. It marked the first time W&L was the No. 1 seed in the league tournament since 2005. Wills was named the ODAC Coach of the Year following the season.

Wills came to W&L from DePauw University in Greencastle, Ind., where she served as the head field hockey coach for eight years. In that time, she guided the Tigers to a 121-40 (.752) overall record, four regular-season conference titles and three conference tournament championships.

Wills was named the 2012 National Field Hockey Coaches Association (NFHCA) Great Lakes Region Coach of the Year and the 2012 North Coast Athletic Conference (NCAC) Coach of the Year after leading DePauw to a 21-2 record. The Tigers advanced to the NCAA Semifinals before falling to eventual National Champion, Tufts University. She led her 2013 team back to the NCAA Tournament, while her 2014 team finished 16-3 and fell in the NCAC Semifinals. Her teams received the NFHCA National Academic Award in each of her eight seasons, while she mentored her athletes to seven NFHCA All-America selections, including a pair of first-team honorees. Three of her athletes were named the Great Lakes Region Player of the Year, while seven players in the NFHCA Senior All-Star game.

Active in the sport, Wills has been a coach for the United States Field Hockey Association Futures Program since 2007 and she has served on numerous committees, including the NFHCA All-America Committee, the Senior All-Star Game Committee and the Coach of the Year Committee. She was also part of the NCAA Field Hockey Great Lakes Regional Advisory Committee.

Prior to her time at DePauw, Wills was an assistant field hockey coach at Washington & Jefferson College (2006-07) and Earlham College (2004-06). She is a 2004 graduate of Centre College with a bachelor of arts in English with a minor in history. She lettered in both field hockey and softball, serving as a two-year captain in field hockey and earning second-team all-region accolades as a junior. 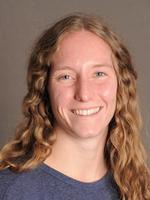 Grace Goodbarn is in her second season as the assistant coach for the Washington and Lee field hockey team.

Goodbarn came to W&L from Transylvania University, where she served as an assistant field hockey coach for the last two seasons. In that role, she was responsible for working with the offense and goalkeepers, and she also assisted the head coach in recruiting, practice planning, travel planning, scouting, and film breakdown.

On the turf, Goodbarn helped guide her players to five all-conference citations and four all-region accolades across her two seasons.

Goodbarn is a 2016 graduate of DePauw University, where she earned a bachelor of arts in history and political science.  She was a four-year member of the Tigers' field hockey team, serving as a team captain for her senior season.  Goodbarn helped lead DePauw to three conference titles and an NCAA Semifinal appearance as a first-year player in 2012.  She finished as a four-time all-conference and all-region player, and she was named the 2015 North Coast Athletic Conference Co-Player of the Year.  She also earned NFHCA All-America honors as a junior and senior.

Goodbarn is currently pursuing a master's degree in public administration with a specialization in local government from the University of Colorado-Denver. 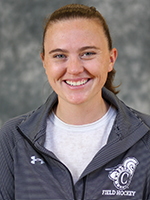 MacDonald came to Castleton for the 2019 season after spending the previous season as an assistant at Dickinson College in Carlisle, Pennsylvania, where she coached two All-Conference student-athletes and one All-Region honoree. Her primary duties included assisting the head coach in all aspects of coaching and program administration, as well as on and off-campus recruitment of high-achieving student-athletes. 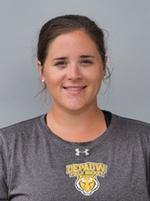